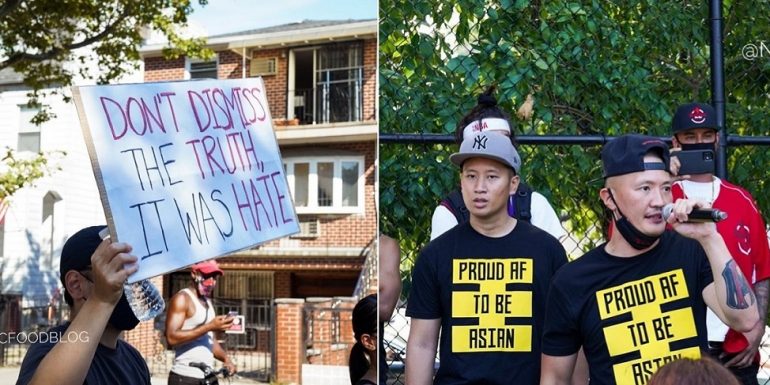 A “Unity March” was held on Saturday, August 1 in Brooklyn, New York, and eventually ended up converging in front of the 62nd Precinct in response to an 89-year-old Chinese woman was who slapped by two unknown assailants, dosed with flammable liquid, and her shirt set on fire. Chants “When grandma is getting attacked! We stand up and fight back!” filled the crowd as they approached the police precinct.

The NYPD refuses to acknowledge this incident as a hate-crime and the entire handling of the case, which occurred on July 17 is widely viewed as an embarrassment to the department. When other minority groups are so blatantly assaulted with such malice—local officials have no problems labeling the incident as a hate-crime, however, violence toward Asians are rarely viewed as “hate-crime.”

“This is not just an Asian rally. This is a rally against racism and hate crimes,” China Mac stated through his Instagram account. “I encourage everyone to come out and stand with us. But for the Asians in the area. If you do not come out today, you have no right to ever complain about how we are being treated, because you are not ready to fight it,” Mac finishes.

New York has been a hotbed for anti-Asian attacks. From a random Asian lady who had acid poured on her back while taking out the trash, to Asian passengers in public transportation pulled out of their seats and told to “go home,” to being lynched during recent riots and robbed of everything of value within seconds.

Asian-Americans are viewed as easy targets by surrounding communities in New York. Unlike Los Angeles, which saw almost no looting or rioting in the Asian-American communities this time around because the Asian population was overwhelmingly armed and was actually looking forward to gun battles—revenge for the 1992 Riots, New York Asians have been overwhelmed.

Strict gun laws have prevented Asian-Americans from the ability to properly protect themselves. Therefore, many of the elderly are at the mercy of their attackers. And when attacked, local authorities refuse to admit labeling it a “hate-crime.” This means if the perpetrators are eventually caught, the ramifications are less severe. Hopefully, China Mac’s rally will be one of many as Asian-Americans become more organized and are able to get their voices heard and make a change.