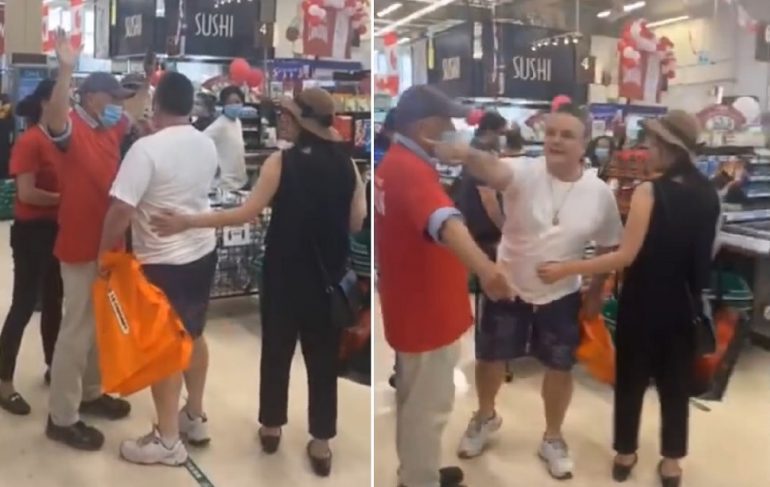 This incident happened at T&T Supermarket, a Chinese supermarket in Toronto, Canada on July 7. The market has a strict policy that requires everyone to wear a mask—customers, and employees. A Caucasian-Canadian male and his Chinese wife both walked into the market without wearing face masks and were quickly approached by a T&T employee.

The male customer became increasingly irate over being ordered to wear a mask and soon other T&T employees approached the scene and tried to defuse the situation. The Canadian male took offense and dropped what merchandise he had on the floor and declared “I’m never coming back here, again.” To which an employee responded, “Okay….sorry about that.”

The irate Canadian customer continued his tirade about the virus coming from “you guys” and got into a puffing stance with one of the T&T employees and asked, “Where you are from!?” Where are you from!? I told you have I have asthma.”

The T&T employee responded, “I’m Canadian.” And the irate customer replied, “No, where are you really from!?”

Multiple supermarket employees managed to eventually herd the irate customer and his Chinese wife towards the front of the market. At this point, the customer decided to scream and point at all the other Chinese customers “I will have an asthma attack and these ‘communists’ are all attacking us!”

The customer approached an employee, face-to-face and demanded, “Get out of my face! Go back to China where you came from and take your coronavirus back to Wuhan!”

The employee vehemently responded “I’m Canadian,” to which crazy customer responded sarcastically, “And I’m Chinese.” The wife of the irate customer can be seen trying to calm him down but to no avail. Nearly a dozen employees eventually escorted the couple out of the store.

These incidents are surprisingly occurring in predominantly liberal-progressive provinces in Canada and the United States. 31.8% of all hate-crimes against Asian-Americans in the United States are from California, the beacon of progressivism. New York is second place with 12.9%, also a very blue and progressive state.