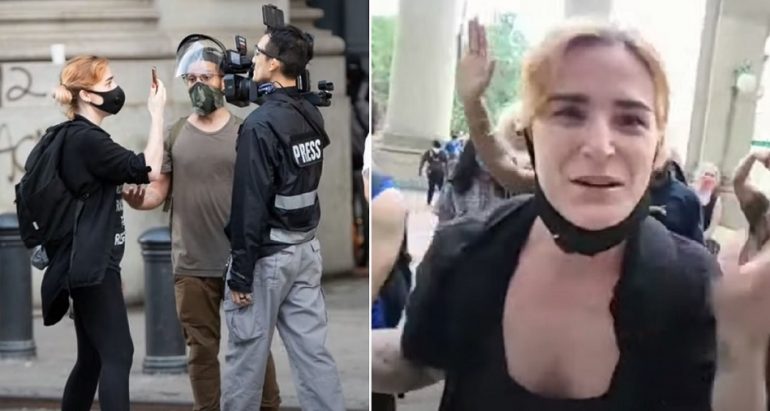 This incident occurred on June 30, 2020, by the Municipal Building in Manhattan, New York City. An Asian-American journalist for LoudLabs News NYC was simply covering the Black Lives Matter protest.

From the get-go, a Black Lives Matter protestor approaches the Asian-American journalist and says “You’re making us all look bad.” The journalist in question was simply standing and filming the protests and responds, “Journalism is unbiased.”

Moments after being approached by a random protestor, the Asian journalist films two new protestors approach him, a Caucasian male and female. They can be seen giving hand gestures—telling him to go away.

Throughout the day, the journalist films the protests and is approached by other protestors who can clearly be seen in the footage harassing him. From the journalist’s voice, he’s clearly fearing for his safety and walks toward police. One of the protestors can be heard saying “Are you fu*king kidding? You’re gonna go to the cops?”

Multiple BLM protestors can now be seen filming the journalist with their smartphones and saying “This guy right here, pretending to be press.”

Every time the journalist tries to get away, a Caucasian woman can be seen blocking his path every step of the way. Every time he changes his direction to get away, she blocks him once again and screams “Don’t touch me!”

Police eventually clear a path for the journalist to get-away while being called a “liar” by Black Lives Matter protestors for accusing them of harassment. As the clip ends, the journalist is obviously fearing multiple BLM supporters will physically attack him once he’s clear of the NYPD. Thankfully, it didn’t happen.

The Asian-American journalist did not wear any type of clothing to signify he was with a specific alt-right news outlet. It didn’t matter if he was left or right to the Black Lives Matter supporters, he was seen as an enemy for being Asian and not marching with them, and for that, he was continuously harassed. Such a noble group of people, wouldn’t you say?