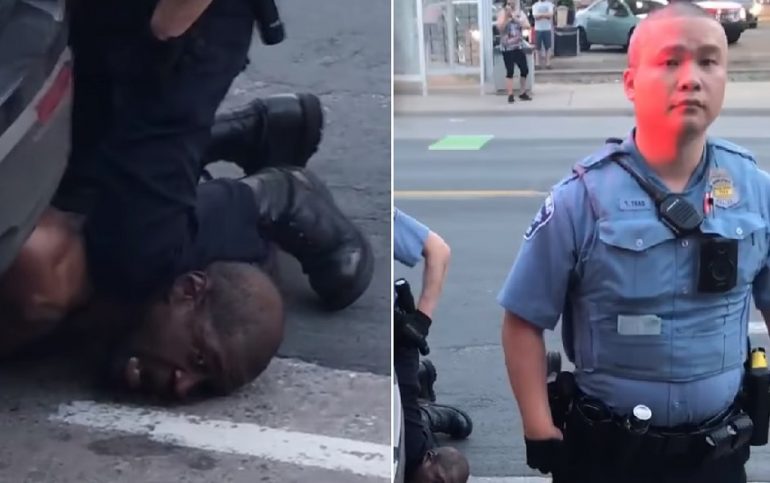 The incident occurred Monday evening around 8 pm in south Minneapolis. Police responded to a man allegedly trying to use forged documents at Cup Foods.

Once police arrived at the scene, they found an African-American in his 40s intoxicated inside a blue car. Later identified as George Floyd.

“After he got out, he physically resisted officers” John Elder, a police spokesman stated to reporters. “Officers were able to get the suspect into handcuffs and officers noticed that the man was going into medical distress.”

Although the police statement is factually true, it does not paint the whole picture of the incident. A video was posted on social media, which shows a Caucasian police officer kneeling on Floyd’s neck at the side of a squad car. Floyd can be heard begging and groaning at the police officer, telling them he can’t breathe.

An Asian police officer can be seen holding the crowd back. One bystander can be heard saying “He’s not even resisting arrest right now, bro.”

Nearly five minutes goes by since the officer began kneeling on Floyd’s neck. Floyd then loses consciousness. An ambulance did eventually arrive and Floyd was taken to Hennepin County Medical Center. He was pronounced dead shortly after arriving, police stated.

The FBI has been called to investigate the matter. In a press conference Tuesday morning, Minneapolis Mayor Jacob Frey stated “I believe what I saw, and what I saw was wrong at every level.”

Minneapolis Police Chief Medaria Arradondo stated federal authorities are now leading the investigation as well as the Minnesota Bureau of Criminal Apprehension. The two Minneapolis officers involved in the incident are on “relieved of duty status,” the police chief stated. Both officers are still being paid, however.