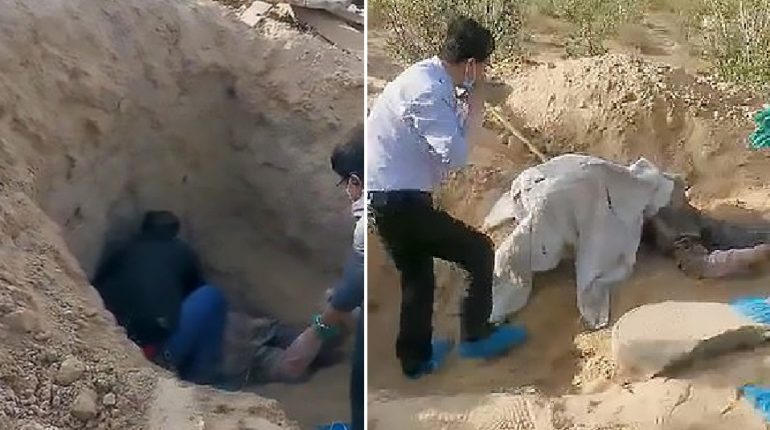 Authorities in north-western China’s Shaanxi province quickly rescued the paralyzed 79-year-old mother who was miraculously still alive after being buried for three days by her 58-year-old son.

The 58-year-old son surnamed Ma is currently being detained and will be charged with attempted murder, according to The Daily Mail.

The 79-year-old mother’s daughter-in-law, surnamed Zhang, reported her missing to authorities Tuesday, May 5. She stated to authorities she noticed her mother was missing after Mr. Ma put her on a pushcart and wheeled her out Saturday, May 2, around 8 pm. When she confronted her husband about what happened to his mother, he lied and said he hired a driver and sent her off to relatives.

The police immediately brought Mr. Ma in for “interrogation.” Very quickly, Mr. Ma confessed that he buried his mother alive in an abandoned tomb and provided police with its location. He also confessed to the police he couldn’t stand the smell of urine and feces in the house and wanted her gone.

Authorities immediately rushed to the scene and started digging after they heard screaming coming from inside the abandoned tomb. They found the paralyzed mother alive and physically well, considering the fact she was buried without food or water for three days. The mother is currently in stable condition at a local hospital.

Feature Screenshots via The Daily Mail