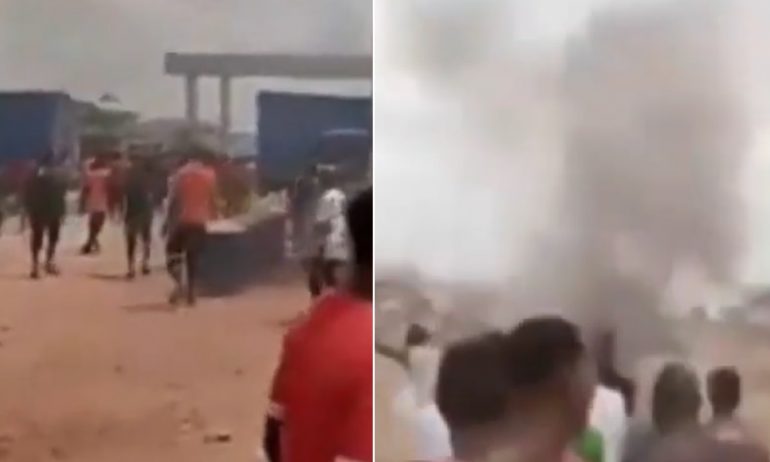 The Kenyan Report discovered footage of Nigerian youth breaking into the premises of a Chinese factory. The footage shows people scrambling around the property and then eventually shows a huge cloud of smoke from a structure in the background.

These actions were widely praised by netizens and seen as a necessary retaliatory action against the recent treatment of Nigerian nationals in China.

Kenyan Senator, Ladema Olekina demanded all Chinese be kicked out of Kenya and lambasted the Kenyan government for being too lenient toward China.

“All Chinese should be kicked out of Kenya! PS Kamau is lying through his teeth! If he cared about Kenyans he would not have been defending the Chinese! Total nonsense! Ambassador Serem is also busy enjoying herself in China instead of working for Kenyans! Home guards attitude!”

The Chinese government was finally able to contain and level off cases of COVID-19 outbreaks within the city of Guangzhou and people were beginning to start work and go on with their lives again. However, five Nigerians tested positive for COVID-19 within the city and were ordered to self-quarantine. The five infected Nigerians frequented the same restaurants in ‘Little Africa’ in Guangzhou where African nationals live.

Guangzhou officials further investigated the matter and discovered 16 subsequent infections in the same area where the Nigerian nationals frequented. Officials then took drastic action against African nationals in Little Africa according to South China Morning Post.

According to The Washington Post, China gave the continent of Africa a $60 billion loan with no political strings attached. China surpassed the United States in 2009 as Africa’s largest trading partner; signing deals with over 40 countries in the continent. NPR reported in 2017, China spent $354.3 billion in aid to Africa.

China is currently assisting Africa financially more than any European country at this current time. Recently in December 2019, the Chinese heavily assisted Ethiopia with the launch of its first satellite, both financially and technologically. It was designed, built and paid for with Chinese money, according to Quartz Africa.