Former “Lost” and “Hawaii Five-0” star tested positive for coronavirus. The Korean-American star announced it through his Instagram account on Thursday. He currently resides in Hawaii where he was tested positive. Mr. Kim was shooting the NBC series “New Amsterdam” for the past few weeks in New York before flying back home.

Daniel stated, “I wanted to let you know that yesterday I tested positive for COVID-19, the disease caused by the coronavirus.” Once the pandemic was announced a few days ago, Daniel flew back to Hawaii to be with his family like so many others.

Daniel continued to state “It’s important for you guys to know that I was asymptomatic during all of this time,” he said, although when the flight was landing he noticed “scratchiness” in his throat. “To be safe, when I got home I quarantined myself in a room in the house and tried to rest on my own.”

Once his symptoms got worse: body aches, fever, and tightness in his chest; Mr. Kim went to a newly opened drive-through testing facility in Honolulu. He noted the test was painful “They shove a huge swab into your nose and into your throat,” he said — but worth it.

Daniel emphasized the importance of practicing social distancing and following the recommendations set forth by the CDC and other government organizations. He wanted to add: “And one last very important thing: Please, please stop the prejudice and senseless violence against Asian people,” said Mr. Kim. “Randomly beating elderly, sometimes homeless Asian Americans is cowardly, heartbreaking and inexcusable. Yes, I’m Asian, and yes I have coronavirus, but I did not get it from China. I got it in America. In New York City. And despite what some political leaders want to call it, I don’t consider the place where it’s from as important as the people who are sick and dying. If I did, I would call this thing the New York virus, but that would be silly. The point is, the name-calling gets us nowhere. What matters is how best to take care of ourselves and one another.”

Feature Image via The Hollywood Reporter 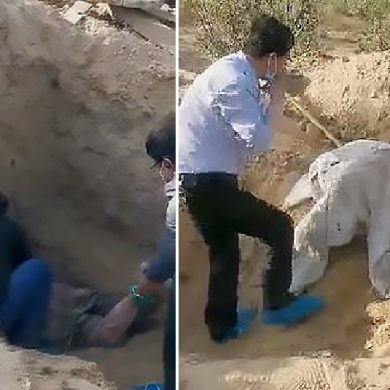