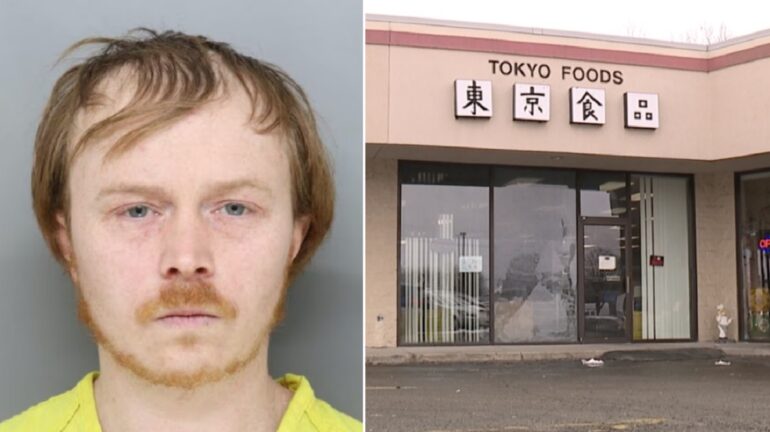 EVENDALE, OH—A man is facing charges after he allegedly fired multiple rounds into an Asian grocery store inside a plaza in Evendale on Sunday.

Witnesses said a man pulled up to the shopping plaza and fired several rounds into Tokyo Foods and then proceeded to walk around the parking lot and fired multiple rounds into other businesses, according to court documents.

Thankfully, Tokyo Foods was closed at the time.

Court documents also show there were nine people inside a neighboring business when the shooting took place and several of them took shelter inside a bathroom.

“We came up and saw a person with a gun in camouflage, pointing the gun at the window of the Tokyo Foods Store, firing into the window,” Dr. Jan Rosenbaum Sass told WLWT5.

Responding officers found the suspect in the parking lot with a pistol in his hand and was taken into custody.

The suspect was later identified as 33-year-old Daniel Beckjord. He was charged with five counts of felonious assault and one count of improperly discharging a firearm at or into a habitation, reports WLWT5.

“When the defendant was taken into custody and Mirandized, he began saying nonsensical things like the reason that he was out of business was because he was the president of Tokyo and that Tokyo Foods was not in compliance. And that he was investigating sex trafficking, among other things, indicating the defendant was suffering from some mental illness,” Prosecutor David Wood said.

“We also found a very large marijuana grow operation within the house. There’s a subsequent search warrant that’s being executed currently in regard to that. So there will be a multitude of further charges coming,” said officer Steve Roach, with the Evendale Police Department.

Authorities say Beckjord has had several recent arrests and contacts with law enforcement in Hamilton County, Belmont County, and Kentucky.

“In the wake of the terrible mass shooting over the weekend in Monterey Park, California, my thoughts are with those who lost their lives and with their families. We learned this morning that an individual is accused of firing shots into an Asian grocery in Evendale. I am grateful to local law enforcement who was able to contain the situation that could have easily become a repeat of the deaths in California.

“I grew up in Evendale, and I am a proud Asian American. This event hits too close to home as I imagine my neighbors, friends, or family members out on a Sunday afternoon, headed out for groceries like any other weekend. I personally have frequented Uncle Yip’s, where people took refuge from the shots being fired at the grocery next door, on many occasions. Everyone deserves to be safe as they go out into their community.

“Our Asian American neighbors across this country have experienced an increase in violence, hate crimes, and racism since the beginning of the pandemic, and it is still happening. This is unacceptable.

“The vibrant Asian American community in Hamilton County is part of what makes our region such a great place to live and work. My thoughts are with those whose lives were forever changed after this weekend’s violent events. We must do better to protect our Asian American neighbors and come together in peace.”