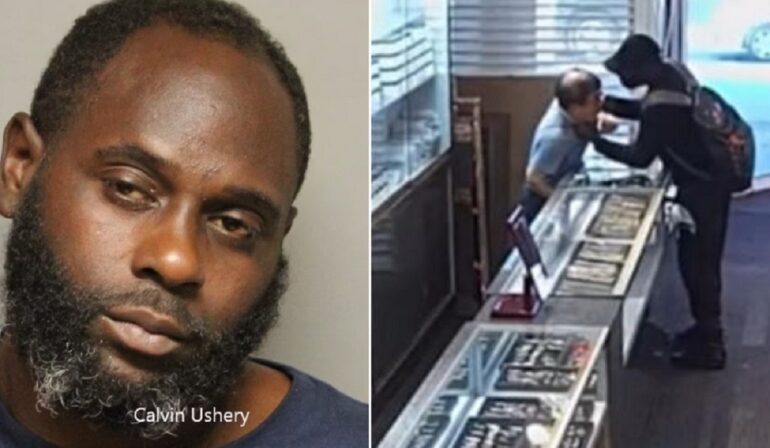 WILMINGTON, DE—The African-American male suspect who brutally beat the owner of Solid Gold Jewelers on West 9th Street in Wilmington, Delaware on September 15 has been indicted on six felony charges—seven charges in all—that could land him in prison for up to 107 years.

A viral video at the time showed Ushery jumping the counter of the store after being let inside. He then pistol-whips the owner, a 68-year-old Korean-American man, ghetto stomps and kicks him in the head 28 times, and savagely hit the victim with a hammer during a violent robbery.

This 68-year old jewelry shop owner was pistol-whipped & hit in the head w/a hammer 9/15 in DE.

“This assault was brutal, cowardly, and deeply disturbing,” Jennings said in a statement.

“These are major felonies with severe consequences. We never choose these charges lightly — but they are completely appropriate under the facts. At 68 years old, the victim was not only robbed of his livelihood but viciously attacked with a deadly weapon and hospitalized with devastating injuries. He and his family deserve what any of us would want in their shoes: full justice under the law. I’m grateful to the prosecutors and the Wilmington Police Department who investigated this case and brought it to indictment; to the Suh family for its courage and strength; and to our community for rallying around the victim in his time of need.”

The 68-year-old victim was immediately rushed to the ICU in critical condition after suffering internal head bleeding and a severe concussion. He spent four days in the ICU after being transferred to a rehabilitation facility. He is currently relearning to walk, read, and talk, according to his GoFundMe.