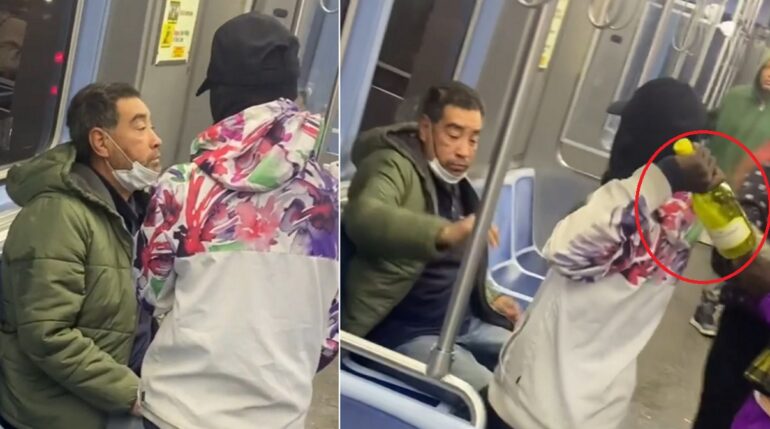 CHICAGO, IL—The savage attack happened around 2:12 a.m. on Saturday on a CTA Red Line train and was caught on camera.

The now-viral video show two African-American individuals ganging up on an elderly Asian man who was seated alone. They asked for the victim’s ID, portraying themselves as “wallet inspectors,” and forcibly reached into the victim’s pockets.

As the elderly Asian man tried to retrieve his stolen wallet, one of the African-American robbers strikes him on the forehead with a wine bottle, leaving the victim hemorrhaging onto the train floor.

No further information is available about the victim. However, the elderly Asian man isn’t the only victim in Chicago over the weekend.

According to the Chicago Sun-Times, 9 people were killed and 54 wounded last week. A total of 60 people were shot, including a 3-year-old girl, a 10-year-old boy, and a 14-year-old girl in Mayor Lori Lightfoot’s Chicago.

The media portrayed the city of Chicago as one of the most well-managed cities in America because of its African-American leadership. Ignoring the propaganda, Chicago is one of the most dangerous cities in the country. The number of people shot in the city in one month outnumber all mass-shooting victims throughout the United States for an entire year.

The CTA released a statement on Monday.

“The Chicago Police Department (CPD) is the provider of law enforcement for the CTA, they are the best source for any information regarding the deployment of resources in light of this incident. With regards to the use of K-9 security teams, there are currently 24 teams scheduled to patrol CTA properties at any given time, which complement more than 300 unarmed guards. Due to reasons of security, we cannot provide specifics regarding the deployment of these resources, but 24 hours a day unarmed guards and unarmed K-9 teams patrol stations, as well as trains. More than 900,000 customers use CTA every day, and every effort is being made to provide a safer transit environment for both our customers and employees. On an average weekday, there are 2,300 train trips and nearly 18,000 bus trips. While there is broad, strategic coverage by officers and security guards, it is impossible to have officers on every train and bus, and at every facility all hours of the day.”

Anyone with information about this incident should call police at (312) 745-4443 or submit a tip anonymously at CPDTIP.com