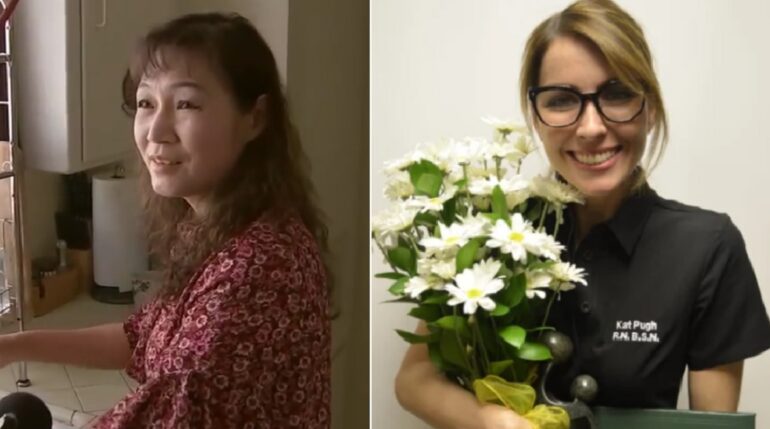 ARCADIA, CA—An Arcadia nurse is being held without bail after she allegedly fired several shots into the apartments surrounding hers earlier this week.

Kathryn Pugh, 39, was arrested Monday for illegally discharging a firearm at an inhabited dwelling in the 600 block of Sunset Boulevard in Arcadia. Authorities say there was an ongoing dispute between the neighbor in the apartment below Pugh’s.

“We found an intoxicated female [Pugh] in possession of two guns. We discovered she shot two rounds through a downstairs apartment unit,” stated Arcadia police Sgt. Ryan Mulhall. “We found a bottle of tequila inside her house, and she was exhibiting signs and symptoms of being drunk.”

“Suddenly, there’s a straight bullet,” she told ABC7. “When I saw the hole, I was like, ‘This is a real gunshot!’ So I called police immediately.”

Lin has been teaching pianos from her apartment for almost three years but says when Pugh moved in last year, she started complaining about the noise.

Pugh finally lost it on Monday as Lin was getting ready for her next lesson.

Lin initially heard a loud bang around noon while she was making lunch in the kitchen. She assumed Pugh just slammed a door. About an hour later Lin heard two more loud bangs, which she assumed was more angry noise coming from Pugh.

However, after the fourth shot, which came through the ceiling and struck a lamp on her piano, Lin realized they were gunshots.

Lin later checked her kitchen and found her rice cooker stopped a round after puncturing her cabinet.

“The rice cooker was just right below the bullet hole,” said Lin.

Pugh’s bail was initially set at $250,000 and then raised to $500,000, but Judge Terry Lee Smerling deemed Pugh to be a danger to the community and ordered her to be held without bail, according to ABC7.

Pugh is a registered nurse at Huntington Hospital and recently won a nursing award in 2019. However, ABC7 later confirmed Pugh had not been employed at Huntington since December 2020.

Pugh has no criminal record, however, Lin is afraid Pugh will “seek revenge” if she returns to her apartment.