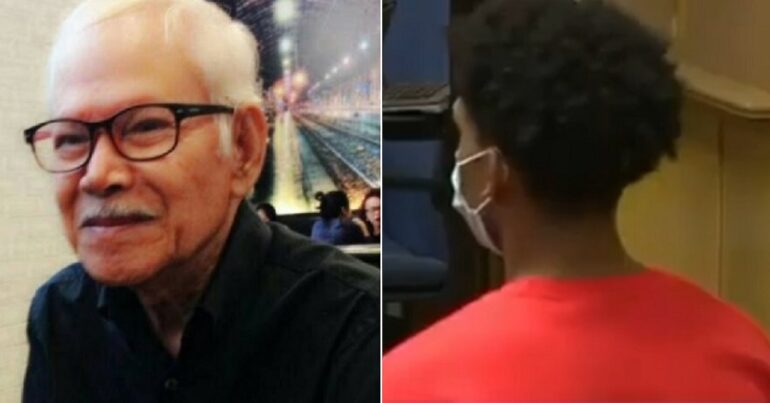 Anita Nabha, 20-year-old Antoine Watson’s attorney, said he was distressed after a “stressful encounter with police hours earlier” and may not have known the man was elderly, reports the San Francisco Chronicle.

Essentially, it was the police’s fault Watson pushed Vicha to his death. Nabha is building a case that charges should be reduced to involuntary manslaughter instead of murder and elder abuse.

District Attorney Chesa Boudin at the time, refused to charge Watson with a hate crime. Many say this was the catalyst that angered Asian-Americans to recall him.

The now infamous video footage was played during witness testimony this week, showing Watson sprinting across a street and knocking Vicha to the ground, and screaming with delight. The 84-year-old was simply out on his usual morning walk.

“He did nothing wrong. He did not provoke anyone. What happened to him was just horrible and it should never happen again,” said Leanna Louie, a public safety advocate and candidate for supervisor. “And this is why we’re out here over and over again to remind people.”

During Watson’s preliminary hearing back in February 2021, he entered a not guilty plea to charges of murder and elder abuse causing death during the brief court appearance. As he was escorted out of the courtroom, an older woman later identified as his grandmother shouted, “I love you Antoine!”

When asked outside the courtroom what she wanted to see happen, Watson’s grandmother arrogantly laughed and said, “To see him walk out this door like I’m walking out right now.”

Photos of Antoine Watson are not being released to the public because the judge fears it will lead to more “anti-Black rhetoric.”

“It’s a strong and powerful that makes us raise up our voice and demand justice for Vicha,” said Vicha’s daughter, Monthanus Ratanapakdee during a rally earlier this week. “The story of my father is not going to be in vain. His memory should be about equal rights for everyone. Asian Americans deserve to be treated equally. That is the promise of the American life.