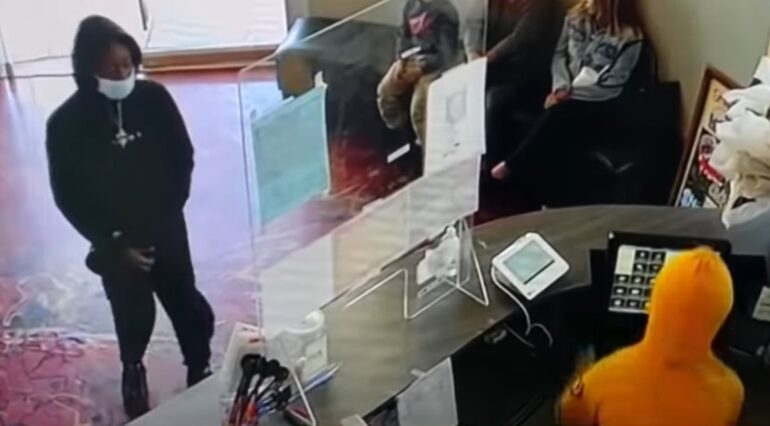 Security footage from inside The Kickin’ Crab showed a group of three “teens” wearing hoods and masks, loitering in the lobby of the restaurant for several minutes on Sunday, March 20, according to CBS News.

The second the employee behind the counter walked away—the teens ripped the cash register off the counter in front of multiple customers and calmly walked out of the restaurant as if they’d been doing it for years.

“We never really thought that someone would steal the register in broad daylight,” Jayson Mai, the manager at The Kickin’ Crab in Baldwin Hills said to CBS News.

Mai recognized the almost identical clothing the three teens wore during his robbery through CCTV footage from a CBS broadcast he saw of possibly the same teens smash-and-grabbing Fortune House Chinese Cuisine on Tuesday, March 22.

“Seeing the video it just clicked in my mind, those are the same teenagers that took our register,” Mai stated.

Mai originally didn’t file a police report last Sunday because the African-American suspects looked like young teens, but decided to do so after watching what happened to Fortune House Chinese Cuisine.

Mai was working Sunday but wasn’t manning the register when a group of customers alerted him that they had just been robbed. He said that the suddenness of the crime caught everyone off-guard, especially since it was in the middle of business, according to CBS News.

“I’ve never seen something like this happen in my eight years of customer service,” Mai continued.

Chinese Food Delivery Worker May Have Been Killed Over Duck Sauce

In both robberies, the person that grabbed the cash register was wearing a yellow hooded sweatshirt. Both Asian-owned restaurants are about 5 miles away from each other.

“Just looking at their height and their build, it looks like they’re the same people,” he said.

Los Angeles Police Department told CBS that they had yet to receive a police report from The Kickin’ Crab for Sunday’s incident, though they would like to investigate further to determine if any connections did actually exist between the two crimes.