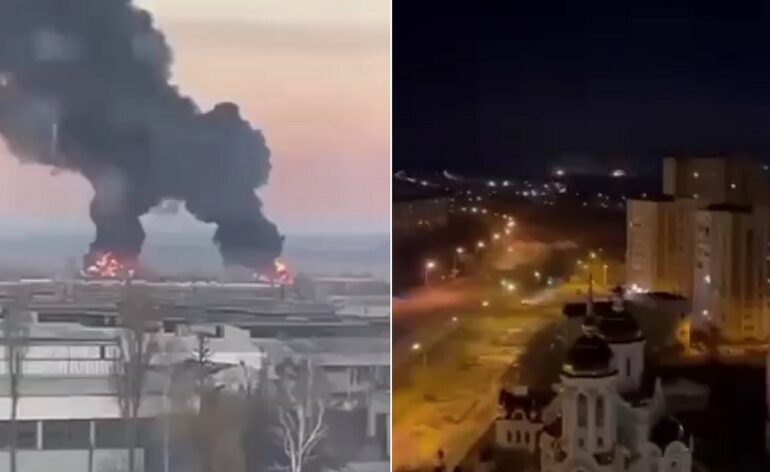 KYIV, Ukraine—The Russian military machine has launched a full-scale invasion after declaring war on Ukraine. Simultaneously, missile strikes have crippled Ukrainian airbases as explosions can be heard in Kyiv, the Ukrainian capital.

“To anyone who would consider interfering from the outside—if you do, you will face consequences greater than any you have faced in history,” Putin stated during a television broadcast 6 a.m. Moscow time.

The United Nations Security Council convened an emergency meeting Wednesday night without the cooperation of China.

Antonio Guterres, the Secretary General of the United Nations, urged Putin to pull back.

“If indeed an operation is being prepared, I have only one thing to say from the bottom of my heart,” Guterres said.

“President Putin, stop your troops from attacking Ukraine. Give peace a chance. Too many people have already died.”

However, Putin ignored the plea, going on television to describe the Ukrainian invasion as a “special military occupation” and said he wants to “demilitarize and de-Nazify” the country.

To offset Allied sanctions, China and Russia signed a new 30-year gas deal via a new pipeline in early February. The initial deal is worth $117 billion, reports Reuters.

President Putin has ordered all Ukrainian service members to “lay down their arms and go home.” Unconfirmed reports now say the Russians have destroyed the Ukrainian navy in a first-strike operation and taken control of Boryspil Airport in Kyiv.

Russian Spetsnaz (special forces) have destroyed dozens of military installations in central Ukraine as well as military infrastructure, and other strategically important facilities. Ukrainian politicians are now being targeted for assassination.