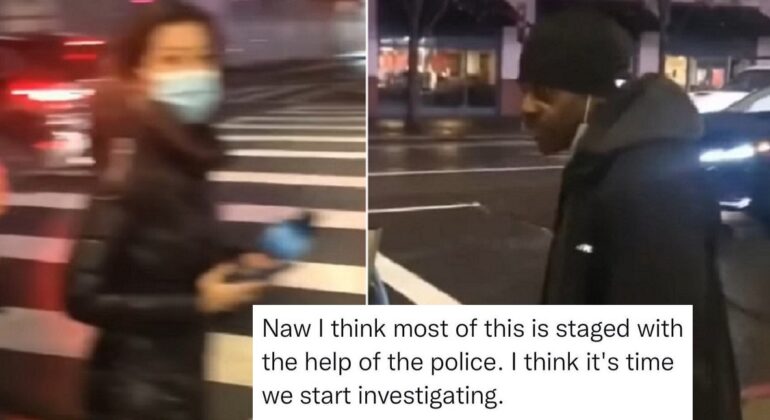 SAN FRANCISCO, California—KPIX reporter Betty Yu and her crew were attacked by an African-American man on Christmas.

50-year-old Alasan Green was arrested after trying to hit a cameraman and breaking a $100,000 camera instead.

Betty Yu tweeted “I was doing an interview outside the Metreon in SF tonight. I heard a man heckling us, before he swung at my photog. He knocked the camera to the ground. We’re okay, but rattled. SFPD came and arrested the man for felony vandalism and misdemeanor battery.”

Yu was interviewing a family at a shopping center on Christmas when Green started verbally harassing them. The husband of the woman Betty was interviewing happened to be recording the interview on his smartphone.

The number of retweets and comments saying this was staged is comical and sad at the same time. Sure, they paid someone to destroy thousand of dollars worth of camera equipment. I doubt anyone from the city would have been surprised to see this happen in person. @BettyKPIX https://t.co/fOeSfujTDw

What’s equally as disturbing is the amount of harassment Betty Yu and many other Asian-Americans have been facing by members of the African-American community.

Apparently, all attacks against Asian-Americans in the United States are “staged” and video evidence means nothing. Many members of the African-American community see themselves as the victims of Asian-Americans who are staging attacks, so “they can show their anti-Blackness with impunity.”

Other African-Americans are blaming Betty Yu for working on Christmas instead of spending time with her family and now the perpetrator will have to spend time in prison for breaking a “relatively inexpensive camera.”

Another commentator said Betty Yu should pay for the camera since it’s “inexpensive” to her.

The automobile they’re using has a TSMC (Taiwan) microchip in it or they’re driving an Asian brand, i.e. Toyota, Hyundai, Volvo, Honda, etc…They’re most likely using an iPhone, which uses a Samsung OLED screen and also contains TSMC chips.