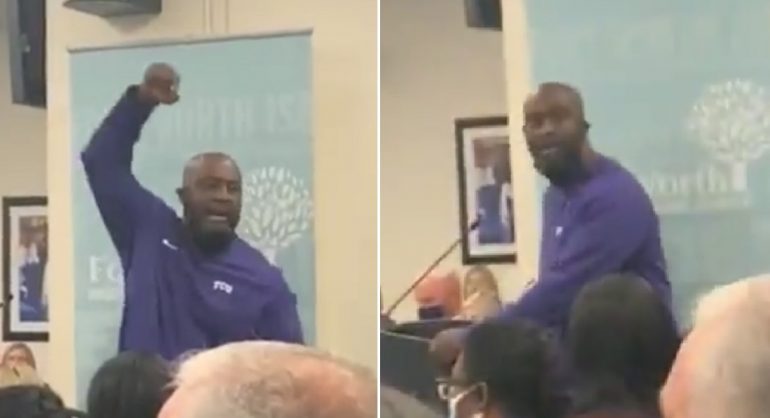 FORTH WORTH, Texas—A pro-Critical Race Theory parent, Malikk Austin, told attendees at a Texas school board meeting that he has “1,000 soldiers ready to go” and they’re “locked and loaded” for those who “dare” question the need for race-based curricula, reports The Free Press.

As concerned parents expressed their discontent over Critical Race Theory (CRT) being taught in the Fort Worth Independent School District during the public comment portion of the meeting, Malikk Austin turned to address the parents from the podium.

“For those who got an issue with this critical race theory, equity it’s something I fought for my children,” Austin said to meeting attendees. “How dare you come out from here and talk about the things that my daddy and my grandparents went through, the lynching, the oppression, Jim Crow. My kids are still being afflicted by this. How dare you come off in here and challenge me on critical race theory.”

Critical Race Theory holds that America is “fundamentally racist” and teaches people to view every social interaction and person in terms of race, which according to CRT defenders, isn’t “racist.”

“Look at the word racism, this is something deliberately done to people of African descent to shackle us down, this hate, fear-mongering ain’t gonna work no more,” Austin added. “It’s over with, we are not our ancestors. I got over 1,000 soldiers ready to go.”

Many Asian-Americans are waking up to the fact that CRT is pure propaganda and their children should not be forced to learn it.

“If you’re an immigrant parent of a child in America, you know, the only way that you see forward to your child having a better life is to train them to be to be talented, to have merit, so that they can compete in an American meritocracy and critical race theory, you know, says that meritocracy is racist,” stated Kenny Xu, author of “An Inconvenient Minority.”

Critical Race Theory is nothing new. It has a deep and complex history, going as far back as the 1930s with the development of Marxism. Today, this problematic curriculum is perpetuated in the halls of Harvard. Ending CRT requires that we reevaluate Harvard. Let’s start now. pic.twitter.com/G8Q6kfA8m1

“[CRT] undermines the entire concept that formulated the ability for Asians to succeed in America.”