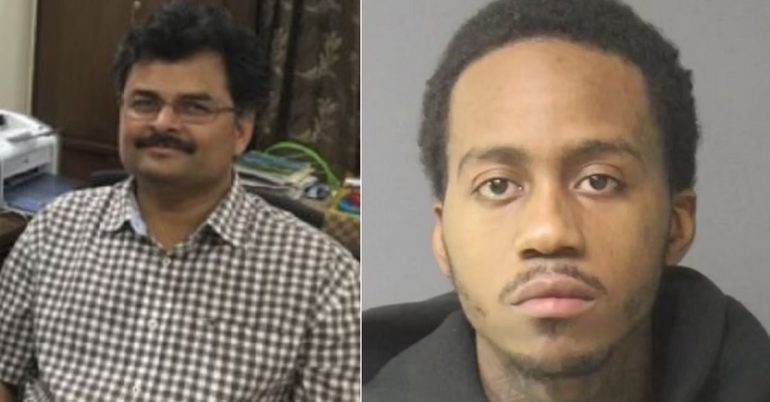 PLAINSBORO, New Jersey—A pharmaceutical executive was murdered in his own home after a robber who witnessed him win $10,000 at a Philadelphia casino followed him for 50 miles to his home.

54-year-old Sree Aravapalli was shot multiple times inside his Plainsboro, New Jersey home in the early hours Tuesday morning during an attempted robbery after he was spotted winning $10,000 at Parx Casino, just outside of Philadelphia.

According to NBC4, 27-year-old Jekai John Reid didn’t know Aravapalli, but watched him take off with his winnings. Reid wanted the money and followed Aravapalli for 50 miles to an affluent neighborhood where he lived.

When the 54-year-old victim arrived home shortly after 3 a.m., Reid was close behind and broke into the house through a back sliding door.

Aravapalli was still downstairs when Reid blasted him multiple times while his wife and daughter were upstairs sleeping.

After reviewing surveillance footage throughout the 50-mile route, police arrested Reid two days after the heinous crime in Montgomery County, Pennsylvania, and charged him with first-degree murder.

Reid is set to be extradited to New Jersey.

The heinous and cold-blooded killing of Aravapalli is only adding to a daily list of Black-on-Asian violence—something the mainstream media stopped reporting on after President Biden passed an anti-Asian hate crime bill. We are meant to believe these attacks all magically stopped.

“No one wins in something like this. How can the person that did this think they could get away with it? Why would they kill him?” Aravapalli’s neighbor, Abhikanit Kar, stated to ABC6.

“You never expect this. We were shocked when we came to know what happened,” Kar added.

Plainsboro Police Chief Frederick Tavener stated: “I want to offer my sincerest condolences to the Aravapalli family for their tragic loss. This is an unexpected and alarming event for their family, friends, and our entire community.”

The CEO of Parx Casino released the following statement Thursday:

“We are deeply saddened by the report that earlier this week a customer of Parx Casino was the victim of a homicide at his home after returning from a visit to the casino. We have learned that law enforcement officials have arrested a suspect who followed the victim home from the casino that night. Parx Casino has been cooperating fully with local and state law enforcement agencies in both Pennsylvania and New Jersey and will continue to do so. Our sincere condolences go out to the family and friends of the victim at this incredibly difficult time.”