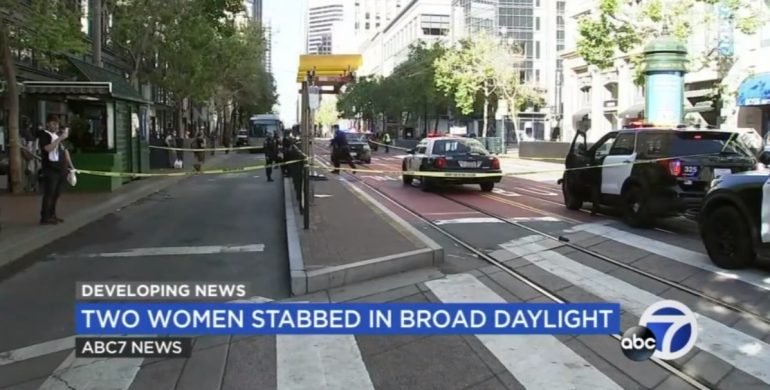 SAN FRANCISCO, California—A 66-year-old Asian woman was stabbed multiple times and pushed to the ground for being Asian by 27-year-old Javon Knighten around 12:16 p.m. Tuesday afternoon near Mission and Steuart Streets in San Francisco.

According to ABC7, the San Francisco Police Department confirms Knighten “randomly” approached the 66-year-old from behind and pushed her to the ground after stabbing her.

Knighten ran away after the attack, however, a 31-year-old Caucasian woman saw what happened, she thought the attack was a robbery and started following the assailant.

When the Good Samaritan confronted Knighten, he stabbed her multiple times, punched her in the face, and kicked her before running away. The Good Samaritan’s injuries are not life-threatening, reports NBC Bay Area.

Police soon arrived and arrested Knighten for attempted homicide. For some odd reason, Knighten looped back around to the crime scene and was spotted. When they ran his ID, they found he had an outstanding arrest warrant in San Francisco for an earlier battery.

Gary, a shop owner, said he tried to stop the Good Samaritan from trying to catch Knighten.

“I said something to the woman, ‘It’s not worth it whatever you’re doing,’” Gary stated. “Everything was happening fast.”

Remembering the Chase Bank Teller Stabbed to Death for Being Asian

The San Francisco Police Department did address the fact this attack had elements of a “hate crime” and it is being taken into consideration. However, District Attorney Chesa Boudin might not agree with the assessment.

“This crime, along with every other crime that we investigate, we look into that aspect if there is a hate-related bias to that motivation,” stated SPFD spokesperson, Officer Robert Rueca.