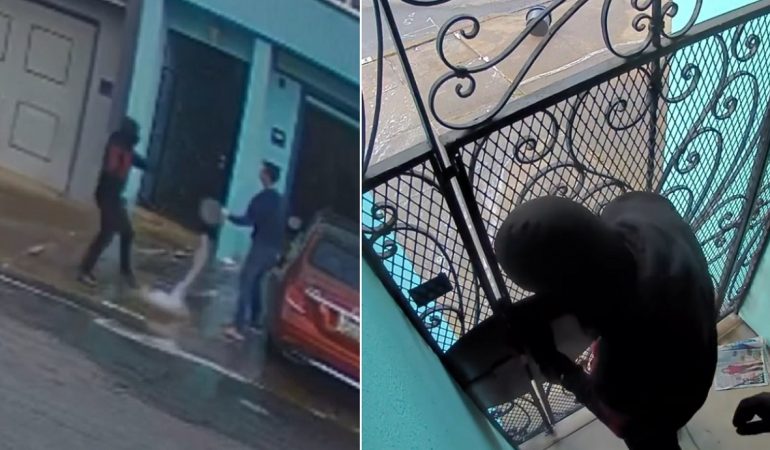 SAN FRANCISCO, California—A San Francisco man was ambushed while washing his car and then robbed and held captive in a bathroom with his family, according to ABC7.

The terrifying ordeal started Friday evening, July 16, while the 40-year-old male victim was washing his car at his home near McLaren Park. He did not want to disclose his identity to ABC7 News due to safety concerns.

Surveillance footage across the street showed a vehicle circling the block at least four times before the victim was held at gunpoint. A suspect can be seen approaching the unknowing victim while he was washing his car.

After forcing the 40-year-old male inside his garage, a second suspect can be seen following from behind.

“They took me up to my house where my family was put us all into the bathroom,” the victim stated to ABC7.

The husband continued to explain, “they said where’s the money, where’s the money?” and stole jewelry valued at thousands of dollars. The wife and two daughters thought they were in for a “grim ending” at the time.

“I was thinking either someone is going to get shot or someone’s going to call the police, like our neighbors, and it’s going to be a hostage situation,” their 11-year-old daughter said.

The husband pulled off his glasses for ABC7 and showed them the deep bruising around his eye and explained “they just pushed my face into the wall to make me realize this is a real situation.”

The rest of the family was not physically harmed.

The very next day, the father and his 11-year-old daughter met with every single neighbor and left letters describing what happened to them.

“Seeing a neighbor and child tell them what happened… there’s more heart. They take it to heart right away,” the 40-year-old victim stated.

“If they want your possessions don’t let them hurt you or your family or anything that’s not replaceable,” says the man. He is speaking out to show how some neighborly love, like sharing a warning or surveillance video, can make a difference.

“I love the city, but the city is changing. Be careful. Be vigilant, if you have to wash your cars, do it with a neighbor.”

SFPD continues to search for the suspects.