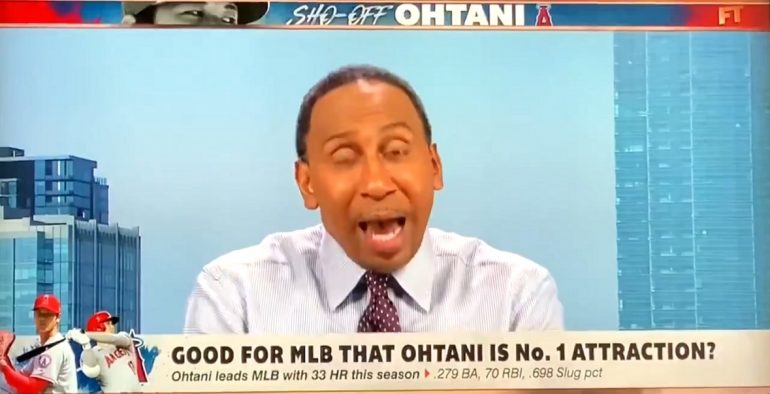 MLB fans are unleashing a “sh*t storm” after ESPN’s First Take host Stephen A. Smith referred to Los Angeles superstar Shohei Ohtani as a “dude that needs an interpreter,”

“I understand that baseball is an international sport itself in terms of participation…But when you talk about an audience, gravitating to the tube, or to the ballpark, I don’t think it helps that the number one face, is a dude that needs an interpreter so you can understand what the hell he’s saying, in this country!”

“In other sports…like basketball, you know Dirk Nowitzki was German and Manu Ginobili and others were from other places and guess what Max [Kellerman], they spoke fluent English. You understood what they were saying when somebody was interviewing them. They didn’t need an interpreter…for some reason with Major League Baseball, you got these guys that need those interpreters,” Smith continued to say.

Many Asian-Americans are calling for major Asian-owned corporations who pay billions of dollars in ad revenue to ESPN to stop until Smith is fired.

Smith’s comments came as Ohtani becomes the first player in MLB history to be named an All-Star as both a position player and a pitcher for the All-Star Game and currently leads the league with 33 home runs this season.

However, shortly after insulting Ohtani, Smith immediately posted a video on Twitter, backtracking what he said minutes earlier.

“My segment on Ohtani this morning on First Take, people are misinterpreting what I’m saying. I’m not talking about the state of the game,” Smith said. “Some of the greatest players in the world are foreign players.”

“I’m talking about the marketability and the promotion of the sport…if you are a sport trying to ingratiate yourself with the American public the way Major League Baseball is because of the problems you’ve been having to deal with, in terms of improving the attractiveness of the sport, it helps if you spoke the English language,” Smith continued. “It doesn’t mean anything more than that. Baseball is a great game but baseball’s audience is significantly older than the NBA, the NFL audience, etc., etc., nothing more. That’s what I was talking about. Nothing more…We know it’s an international sport, we know that that’s great and baseball having the global appeal that it is, fine. But in the United States, all I was saying is that when you’re a superstar, if you can speak the English language then guess what? That’s gonna make it that much easier and less challenging to promote the sport.”

Many netizens aren’t buying the apology and stated Smith should be punished like any other person. Meaning he should be fired and his career should be ruined because if any other person were to say what Smith said; they’d be destroyed.