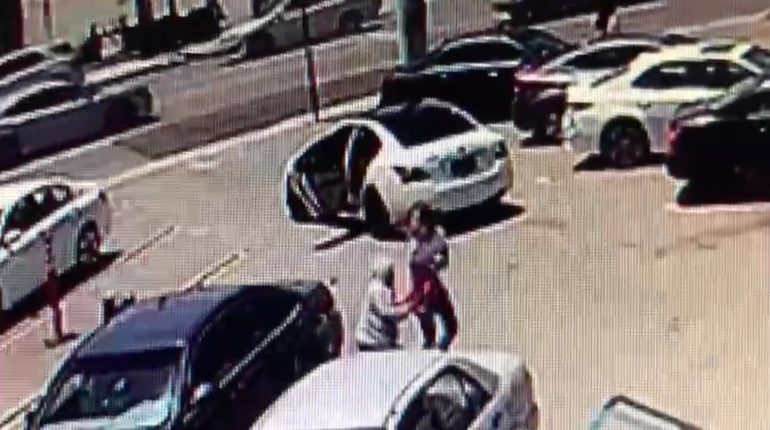 SAN GABRIEL VALLEY, California—A series of violent robberies have shocked the local Asian-American population in the San Gabriel Valley. On Saturday, June 26, three Chinese women were violently robbed of their handbags in Quantong Square on Valley Blvd and another robbed in a shopping plaza in Monterey Park.

One assailant was bold enough to enter 99 Ranch Market around 8:42 p.m. and brutally wrestle away a woman’s handbag—dragging her along during the process—in front of multiple people by the checkout counter, under full store surveillance.

Surveillance footage showed three African-American men, all around 18 to 20 years old, all around 6’ tall. The same description of individuals possibly responsible for multiple robberies and attacks throughout the area recently.

The husband of the woman robbed at 99 Ranch Market told World Journal he’s also concerned because his wife’s handbag contained workplace, car, and home keys as well as a smartphone, credit cards, bank cards, driver’s license, and so forth.

The area is nearly 75% Asian and very rarely experiences any type of robbery between fellow Asians. The husband stated he took his child for a stroll around the plaza—thinking his wife would be safe—however, his false sense of security was broken when he walked back and saw a crowd of people helping his wife after being robbed.

Shortly after the 99 Ranch Market robbery, a mother and daughter were also robbed by the same group of African-American men in the parking lot.

According to the World Journal, the mother was robbed of her handbag the same way as the woman was robbed inside the 99 Ranch Market. While fleeing the scene, the trio knocked the woman’s daughter to the ground and robbed her as well.

Detective Hernandez of the San Gabriel Police Department confirmed to World Journal that there were three victims at Quantong Square that night—all of whom were Chinese. Det. Hernandez also confirmed three handbags were robbed and one person was injured with non-life-threatening injuries.

Many Asian-Americans in the area voiced their outrage by pointing out they go out of their way to stay away from black people and now black people have brought their “ghetto culture” upon Asians in the heart of the San Gabriel Valley.

One Monterey Park resident told Asian Dawn via phone interview, “I just mailed in my CCW application. We live in dangerous times. Biden’s America is a lawless America and we need to arm ourselves against the tyrannical horde. I fear for my parent’s safety as well. Every Asian needs to be strapped right now.”