Man Who Racially Insulted Asian Cop is Arrested by Feds 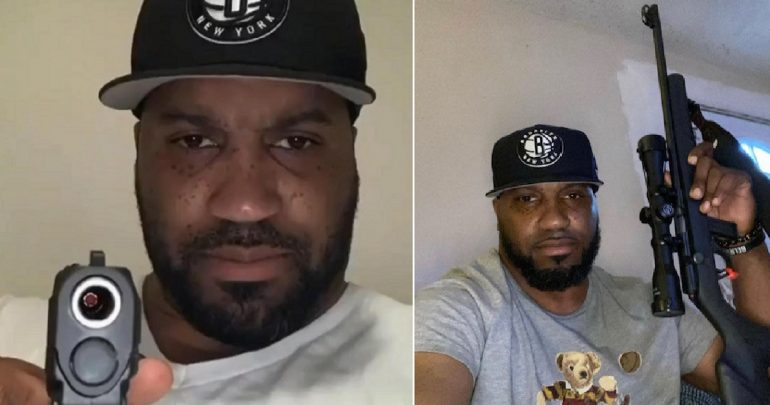 GREENWICH VILLAGE, Manhattan—A career criminal who was caught on video spewing racial insults at a Vietnamese-American police officer in Washington Square Park earlier this month was arrested by the Feds on Friday, according to the New York Post.

Shermaine Laster, of Brooklyn, was apprehended at JFK Airport on an arrest warrant filed in Texas, charging him with being a felon in possession of a weapon, stated an FBI spokesman.

The convicted felon was busted after he allegedly posted photos of guns on Instagram, which also included one showing himself with a firearm at a shooting range in Texas.

Laster also posted another picture showing multiple guns with a caption that read, “No game!!! Proud boys, KKK, skin heads, whitesupremacy I’m not playing absolutely NO GAMES with your kind!! I just wishMy ppl wake up and unify before it’s too late. (Black toys) good to fight in the dark!!”

Laster made headlines earlier this month when he repeatedly called Officer Philip Huynh a “ch**k” while he and other police officers tried to clear out protesters from the park.

“I’m on the sidewalk, what you gonna do? What’s your name? You’re not even from this country. You piece of sh**. You f**king ch**k!” Laster screamed.

A Caucasian man on a bicycle can be heard saying, “Sop calling him a ch*nk, that’s messed up!”

Laster replied by saying black people can’t be racist and he can also be heard saying, “the cops are not our friends.”

Laster has 13 prior arrests, including seven felonies. Four of his prior arrests were for weapons-related charges, according to the New York Post.

The NYPD released a statement shortly after the video of Laster racially insulting an Asian-American cop went viral.

“Each day, NYPD officers are expected to maintain a level of professionalism under an array of difficult circumstances. In this instance, an Asian police officer was subjected to an ugly onslaught of racial slurs and maintained his composure,” a spokeswoman said. “However, it is disturbing to see this type of language used against any Asian person in light of the disturbing increase of Asian hate crimes citywide.”