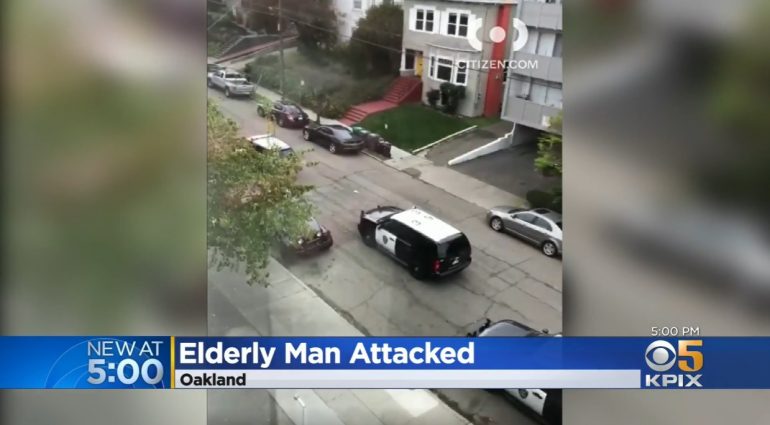 OAKLAND, California—A 75-year-old Asian man was shoved to the ground for being Asian on Tuesday morning, March 9, during his routine morning walk. According to CBSN Bay Area, the elderly man is now brain dead with critical injuries.

Authorities from Oakland and San Francisco are frantically trying to address the attacks on older Asian citizens throughout both cities. However, it’s proving difficult because people are taking issue with publically releasing the description of the suspects.

A neighbor told CBSN Bay Area she recognized him as soon as she saw him being loaded into the ambulance.

Florence Williams has lived in the Oakland neighborhood for 35 years. She says for the past two years, she has seen the same elderly Chinese man walking up and down Jayne Avenue at around 7 o’clock in the morning.

“They brought him around, then I said, ‘That’s the guy that walks up and down the street,’” said Williams. “Every morning, he walks around that time or a little earlier.”

“I was very sad; very sad. And I was telling the officers, ‘I hope you guys catch him real soon.’ Because nobody deserves that. Nobody,” said Williams.

Oakland Chinatown Chamber of Commerce President Carl Chan said this latest attack goes to show the spike in violence is not just in the Chinatown area, but targeting elderly Asian Americans across the city.

“People always thought that if only you’re in the Chinatown community, or in an Asian community, but it could happen actually anywhere,” said Chan. “When I heard about this…it’s just so hurtful. I know people are saying that they’re angry. I’m not angry. I’m so sad.”

“This morning’s violent attack against an Asian-American elder in our Adams Point neighborhood is reprehensible,” Schaaf said. “Our police will investigate thoroughly to determine whether this was racially motivated or a vile crime of opportunity. Every act of violence traumatizes our community, and I pray for healing to the victim and his family.”

KPIX 5 has reached out to the Oakland Police Department to get more information about exactly what happened in the incident and are still waiting to hear back.

The victim has not been identified and no suspect description has been made available by authorities.