OAKLAND, California—A bombshell revelation by Henry K. Lee of KTVU News, once again shows Oakland Police Chief LeRonne Armstrong’s racial bias toward the Asian community, and his show of unity is exactly that, a show.

Henry K. Lee has learned the jailed Chinatown liquor store owner who helped a Caucasian woman in her 30s from being robbed in front of his store has a CCW permit and told police he fired shots to protect the woman. The suspects also rammed the woman with their car.

Police on scene sought the store owner’s release, but were overruled by a superior officer, who wanted to send a message to all citizens that they should “do nothing.” Where would such an order come from? Hint, hint, maybe Police Chief LeRonne Armstrong?

The 36-year-old store owner faces one count of felony assault with a firearm. He was bailed out Tuesday at $60,000, according to Fox KTVU.

“Our message really is that we don’t want to see our business owners or others begin to arm themselves,” said Armstrong. “We would really prefer them to be good witnesses and give us the observations that they have; share that information, call law enforcement immediately and let OPD respond and follow up. What we really don’t want to do is bring any additional issues that threaten safety into the equation.”

Armstrong noted that officers often times are challenged when they have to determine who the suspect is when encountering armed citizens who are trying to intervene in a situation.

“Particularly, we don’t want people to fire weapons into our community. When weapons are fired in our community, there could be unintended victims; people who are hit by gunfire. And we want to avoid that as much as we can.”

Chief LeRonne Armstrong has shown his racial bias in a recent interview with ABC 7 on February 9, 2021, when reporter Leslie Brinkley asked him a simple question.

Do you believe bigotry or racism is a motivating factor in the recent attacks on Asian Americans in Chinatown?

Chief Armstrong responded with, “I will say that we know suspects have come to Chinatown to specifically target Asian victims.” It seems affirmative action also plays a role in the hiring of police chiefs in the city of Oakland.

He refuses to admit these crimes are hate-crimes.

Feature Image via Safe and Just 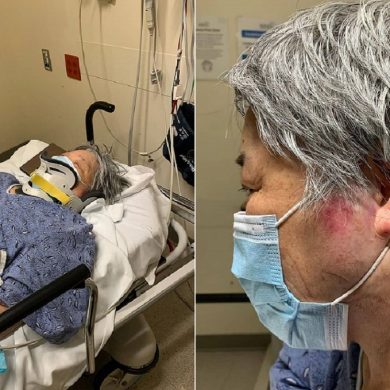