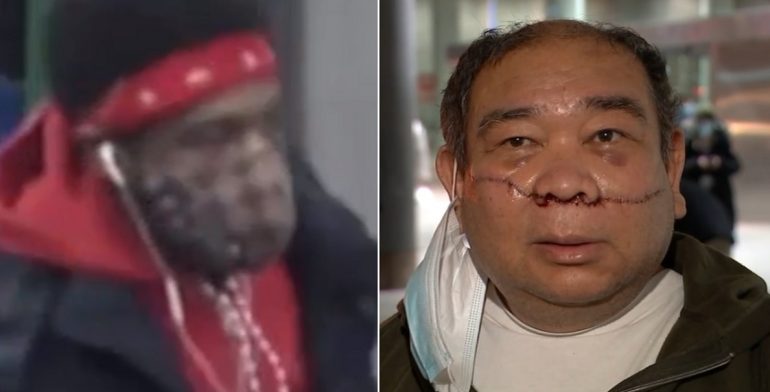 EAST VILLAGE, Manhattan—A Filipino-American man was slashed across the face during a dispute on a subway train in Manhattan, New York. According to family members, 61-year-old Noel Quintana’s wounds were so deep, he was unable to talk.

Quintana was on his way to the first of two jobs Wednesday morning when he was slashed across the face from cheek to cheek, according to ABC 7.

“When I saw him I started crying,” Quintana’s cousin, Vilma Veres said.

Eyewitness News spoke exclusively with the victim who says he was scared for his life.

“I was scared because I thought I was gonna die and nobody helped me,” Quintana said.

Police say he had been in a confrontation with another man while the two were riding on an L subway train.

Quintana says his attacker was kicking his backpack and when he asked him to stop, the suspect attacked him and fled when the train stopped at First Avenue and 14th Street.

Quintana was left bleeding, he stumbled off the train, and was able to get help from a ticket booth attendant who called 911.

This is the latest of a series of subway attacks troubling the MTA, but Mayor Bill de Blasio refused to acknowledge a crime problem. De Blasio believes New York is a shining example of how a city should be run.

“We can talk about facts and encourage the people to understand the facts, or we can just create fear for the sake of fear. We choose the former. We choose to tell people that the NYPD is out there every day, protecting their safety,” de Blasio said.

“When you look at the transit crime numbers, they are down significantly,” Police Commissioner Dermot Shea said.

In fact, NYPD statistics show major crimes, including acts of violence, have plunged more than 50% so far this year compared to the same time last year, according to ABC 7.

Police are now searching for the attacker. They say he was wearing a black mask with a Louis Vuitton logo and a black North Face coat.

Quintana was treated at Bellevue Hospital.