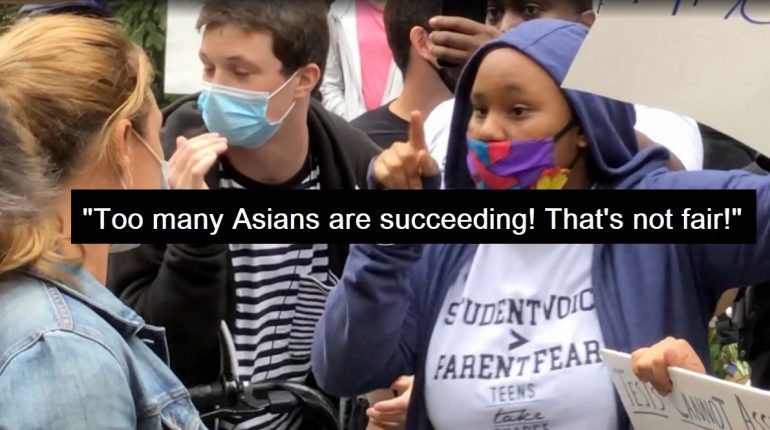 Progressives all across America have declared war on Asians, meritocracy, and STEM (Science, Technology, Engineering, Math). Recently, the San Francisco Unified School District voted to replace their merit admissions process at Lowell High School, one of the best high schools in America and also happens to be 61% Asian, with a lottery-based system.

When Asian-American parents opposed the school district’s plans to enact its new “lottery” system in late October, the school district blasted the parents by stating they were “racist” and responsible for the “toxic culture” at the school. Parents were accused of furthering the “Asian supremacy” agenda by making their children work so hard; their children’s achievements were demoralizing African-American and Latino students.

One African-American parent stated it’s because of Asians hogging up all the spaces “Black people can’t catch up technologically because the ‘stupid Asians’ are keeping black people down out of fear they’d be overtaken.”

When one angry Asian-American parent responded “Trust me, you’ll never catch up. If you need to lower-standards to get in, you’ll never beat us,” a near physical fight broke loose.

Another Asian parent screamed, “First you blame white people, now you blame us!? Grow up! Study harder or go home!”

On Halloween weekend, about 100 families, students, alumni, and community members from Thomas Jefferson High School for Science and Technology stood on the grassy lawn in front of the school and held a symbolic memorial service for America’s No. 1 high school, according to Crushing the Myth.

“Remember the glory of TJ (Thomas Jefferson),” said Yuyan Zhou, a Chinese-American alumni mother, as her friends stood around her with awards and trophies that symbolized the school’s shining achievements.

Thomas Jefferson High School will no longer be the No. 1 school in America after abolishing their merit-based admissions to make way for more less-qualified and less-deserving African-American and Latino students who could not pass TJ’s entrance exam.

The Chinese American Parents Association of Fairfax County sent a three-page letter to the Fairfax County Board of Education, opposing the lack of “respect” that Asian-Americans have been facing in the debate over TJ admissions, according to Crushing the Myth.

Thomas Jefferson spent over 35 years building its reputation as a premier high school. But it only took 12 Democratic members of the Fairfax County School Board only 12 minutes and 11 seconds on Tuesday night, October 6, during an online meeting to kill the school, eliminating its race-blind, merit-based admissions test.

Around the same time parents at TJ found out race-blind tests were eliminated, members of the Boston Public School system in Massachusetts announced they were going to eliminate academic exams to the school district’s top three schools, including O’Bryant School of Mathematics and Science.

Boston school officials argued that STEM school’s racial demographics are “too white and too Asian and they’re both meeting or exceeding expectations at higher rates” than Black and Hispanic students and that’s not fair. The Boston Public School system calls their new plan “racial equity planning tool.”

Mayor Bill de Blasio of New York City is also planning to eliminate race-blind admissions for Stuyvesant High School and the Bronx High School of Science, citing “white supremacy” as the main factor for his quest—never mind the fact those high schools are more than 60 percent Asian.

One bitter first-generation Asian-American parent vindictively stated, “On a brighter note, I know China, South Korea, Taiwan, Japan, Singapore will completely destroy American companies when my children are my age because of these stupid policies. That gives me comfort. These idiotic Democrats will guarantee Asians will win—just not Asian-Americans….maybe we should go work for Asian-owned companies instead of giving our minds to Apple or Intel.”