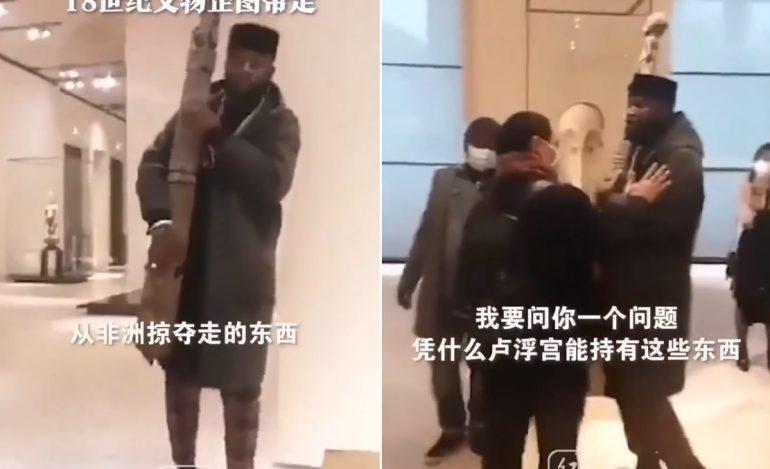 PARIS, France—Congolese restitution activist Mwazulu Diyabanza was arrested at the Louvre Museum on Thursday evening, October 22, when he tried to remove a sculpture from the museum and repatriate it back to African soil.

Diyabanza adamantly declared art this “beautiful” can only be African. Onlookers captured the act on their smartphones and footage of the incident has since gone viral.

The footage clearly shows Diyabanza lifting a sculpture from its mount at the Paris museum before Louvre guards intervene. He was arrested and brought to a police precinct before being transferred to a prison outside the city, according to Artnet News.

However, Diyabanza was released from prison following a hearing at the Paris Judicial Court on Monday, October 26. According to his lawyer, the judge cited the “complexity” of the case and adjourned the trial until December 3.

The artwork is a pair of late-18th-century guardian spirit figures from the island of Florès in Eastern Indonesia, which makes the artwork Asian, not African. The art pieces did not suffer any significant damage during the attempted theft, according to reports.

Less than two weeks before this embarrassing incident, Diyabanza dodged a 10-year prison sentence and a €150,000 fine for a similar action he took in June at the Musee quai Branly, according to Artnet News.

His attorney successfully argued Diyabanza’s actions were not theft, but a political statement. Diyabanza argued Europeans need to come to terms with their colonial past and make amends. Doctors, lawyers, and great minds of Africa were taken away as slaves or killed during European invasions, which explains why the continent of Africa is doing so poorly when compared to the rest of the world.

Diyabanza vehemently claims if not for the actions of the “evil” Europeans, Africa would be more advanced than many European or Asian countries.

“To say that I am not afraid would be to lie to you,” Diyabanza wrote on his Facebook after the arrest at Louvre. “I gathered all of my courage to carry the voice of my ancestors who, by their intelligence and skills, have produced these works.” He added Europeans and Westerners have actively destroyed Africa’s rich history, so they can maintain the false notion of their fake technological superiority; most of which were actually invented by Africans.

He added Africa will be “superior” again because the Indonesian artwork he stole was proof his ancestors showed great intelligence and skill in creating such beautiful pieces of art. Again, the artwork is Asian, not African; Diyabanza continued his rant after being told the artwork was Asian.