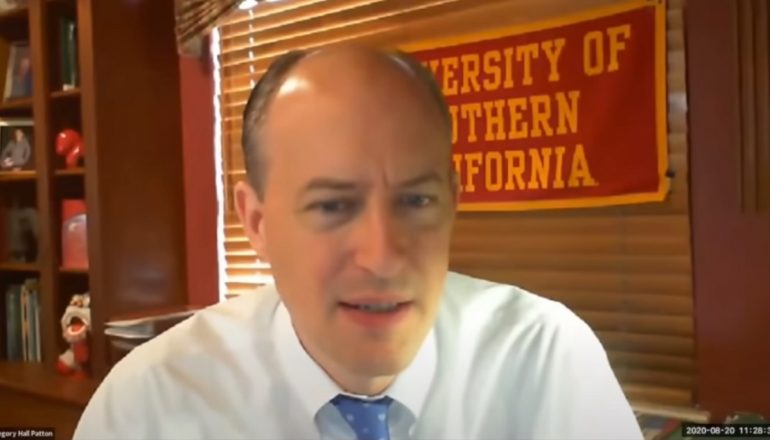 The University of Southern California has placed communications professor, Greg Patton on leave after a group of black MBA candidates threatened to drop his class rather than “endure the emotional exhaustion of carrying on with an instructor that disregards cultural diversity and sensitivities” after he used a Chinese word that sounded like a racial slur, according to the National Review.

Greg Patton is a professor at USC’s Marshall School of Business. He was giving a lecture about using “filler words” in a speech during a recent online class when he used the word that caused so much “emotional distress” amongst the African-American students.

“If you have a lot of ‘ums and errs,’ this is culturally specific, so based on your native language. Like in China, the common word is ‘that, that, that,’ So in China it might be ‘nèi ge, nèi ge, nèi ge,'” Professor Patton said in class.

The National Review obtained an email sent to the university administration on August 21. In this email, the students accused the professor of pronouncing the word like the N-word “approximately five times” in each of his three classes. Apparently, Patton “offended all of the Black members of our Class.”

The African-American students were “appalled” and reached out to Chinese classmates to confirm if this was indeed the proper pronunciation of the word.

“It was confirmed that the pronunciation of this word is much different than what Professor Patton described in class,” a student wrote. “The word is most commonly used with a pause in between both syllables. In addition, we have lived abroad in China and have taken Chinese language courses at several colleges and this phrase, clearly and precisely before instruction is always identified as a phonetic homonym and a racial derogatory term, and should be carefully used, especially in the context of speaking Chinese within the social context of the United States.”

The students further accused Patton of displaying “negligence and disregard” in using the Chinese word and said he “conveniently stop[ped] the zoom recording right before saying the word,” meaning his actions were “calculated.”

“Our mental health has been affected,” the group continued to explain. “It is an uneasy feeling allowing him to have the power over our grades. We would rather not take his course than to endure the emotional exhaustion of carrying on with an instructor that disregards cultural diversity and sensitivities and by extension creates an unwelcome environment for us Black students.”

The students also added the professor’s use of the word “has impacted our ability to focus adequately on our studies.”

“No matter what way you look at this, the word was said multiple times today in three different instances and has deeply affected us. In light of the murders of George Floyd and Breonna Taylor and the recent and continued collective protests and social awakening across the nation, we cannot let this stand,” the student group concluded.

USC Dean Geoff Garrett apologized for the professor’s use of a “Chinese word that sounds very similar to a vile racial slur in English,” in an email on August 24, obtained by the National Review.

“I am deeply saddened by this disturbing episode that has caused such anguish and trauma,” Geoff continued.

Geoff also announced that a new instructor would immediately take over for the remainder of Patton’s class. Patton ended up apologizing two days after Dean Geoff.

“The inclusion is part of a deep and sustained effort at inclusion as I have reached out to find and include many international, global, diverse, female, broad and inclusive leadership examples and illustrations to enhance communication and interpersonal skill in our global workplace,” he said.

“I have since learned there are regional differences, yet I have always heard and pronounced the word as ‘naaga’ rhyming with ‘dega,’” wrote Patton.