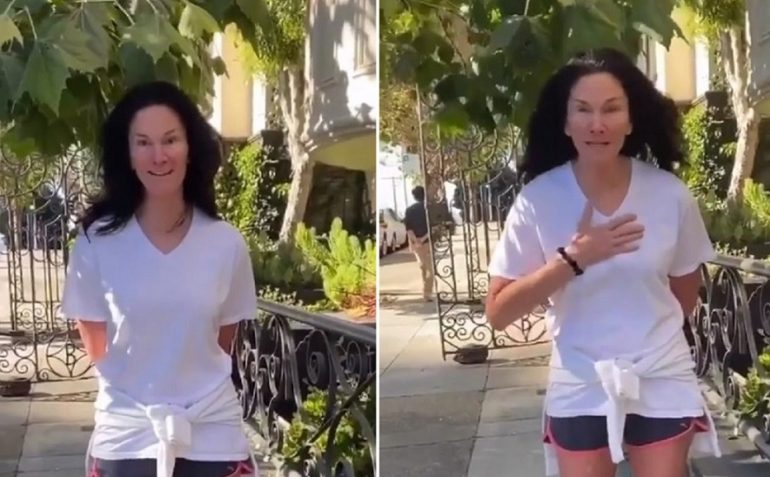 Over the weekend, a Caucasian couple in San Francisco confronted an Asian man, James Juanillo, for stenciling “Black Lives Matter” in chalk on his own property, according to ABC7.

The incident occurred after Juanillo finished stenciling BLM on his property. The couple confronted Juanillo and asked why he was “defacing private property.”

Juanillo responded “If I did live here, and this was my property, this would be absolutely fine? And you don’t know if I live here, if this is my property?”

Juanillo stated to ABC7 News, “She thought this was devaluing someone’s property. She knew it was chalk, she knew this would wash away in the rain. That leaves only the message to be problematic.”

In the video, Alexander claimed she knew the property owner, which wasn’t true, because Juanillo has owned the house for over 18 years. He encouraged the couple to call the police if they didn’t feel safe, which they did.

“The police came and recognized me immediately as a resident of the house and left without getting out of their patrol car. I didn’t even show them my ID,” Juanillo stated.

“I want to apologize directly to Mr. Juanillo. There are not enough words to describe how truly sorry I am for being disrespectful to him last Tuesday when I made the decision to question him about what he was doing in front of his home. I should have minded my own business.

The last 48 hours has taught me that my actions were those of someone who is not aware of the damage caused by being ignorant and naive to racial inequalities. When I watch the video I am shocked and sad that I behaved the way I did. It was disrespectful to Mr. Juanillo and I am deeply sorry for that. I did not realize at the time that my actions were racist and have learned a painful lesson. I am taking a hard look at the meaning behind white privilege and am committed to growing from this experience. I would love to have coffee with Mr. Juanillo in our neighborhood so I can apologize in person and share a dialogue where I can continue to learn and grow and be a better person.”

Another Asian Man Punched in the Head in NYC

“Over the last two days, I have had my eyes opened wide to my own ignorance of racial inequity, and I have thought a lot about my own personal blind spots. I was wrong to question Mr. Juanillo, and I was wrong to call the neighborhood police watch. It was wrong, and I am profoundly sorry for treating him with disrespect.

I have a lot to learn about how racism impacts people in their lives, daily, I have hurt my neighbor. I am full of regret and very sorry. I am hoping to meet with him soon to express my sincere apology and to ask for his forgiveness and guidance in helping me begin the journey towards being a kinder, more thoughtful and sensitive person.”