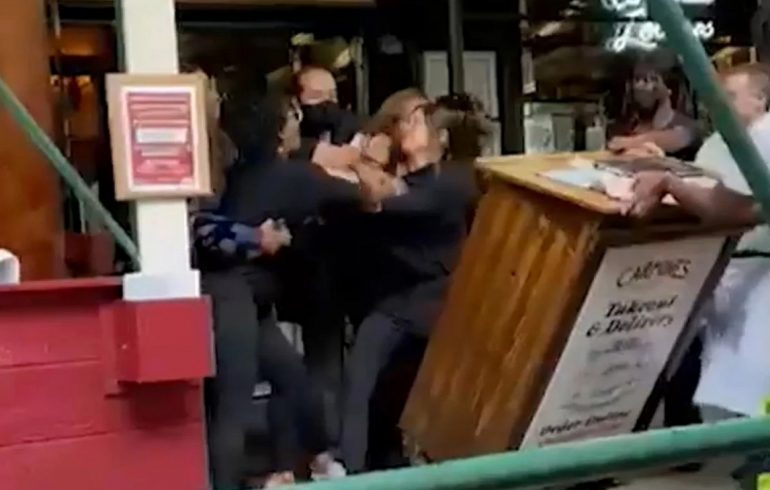 NEW YORK CITY—Three Texas women who were caught on video viciously attacking a Carmine’s restaurant hostess in a dispute over proof of vaccination were arraigned in Manhattan Criminal Court Tuesday on charges that could put them behind bars for up to one year.

49-year-old Sally Rechelle Lewis of Houston, 44-year-old Kaeita Nkeenge Rankin, and her 21-year-old niece Tyonnie Keshay Rankin were arraigned and charged with two counts of third-degree assault, attempted assault, and harassment for the September 16 beatdown of an Asian-American hostess, according to the New York Post.

“We greatly appreciate how seriously the district attorney’s office is taking this attack on our staff,” stated a spokesperson for Carmine’s. “Restaurant workers are part of our city’s lifeblood, and today sends a strong message that criminal acts like these will not be tolerated.”

A lawyer for Kaeita Nkeenge Rankin previously stated to the New York Times that the hostess at the Upper West Side eatery acted “very aggressive” toward the party and lunged at them while uttering the “N-word,” which caused the three African-American women to defend themselves.

However, Carmine’s soon released video footage proving the Asian hostess did not lunge at the three women. It should also be noted during the women’s arrest on September 16, they did not state the Asian hostess uttered the “N-word.” They stated the Asian hostess lunged at them after being “extremely difficult,” and they were forced to defend themselves against Asian aggression.

Shortly after the video was released—exonerating the hostess—New York Black Lives Matter completely changed the subject of what started the altercation and pointed toward a part of the surveillance footage where the Asian hostess passed by the three African-American women.

During that moment, New York Black Lives Matter accuses the Asian hostess of muttering the “N-word.”

The viral video shows the three women—who were visiting New York from Texas—viciously attacking the 24-year-old hostess and striking her on the shoulder, neck, and face.

One of the women allegedly yanked off a necklace, breaking it and leaving a laceration, reports the New York Post. The hostess suffered a concussion, extensive bruising, and scratches on her face.

The three women are due back in court on November 18.

Knowing the double standards of progressive cities like New York, it is completely okay to hurl racial derogatory words at Asians and face no consequences. However, with absolutely zero proof the Asian hostess said the N-word to the three African-American women, that imaginary reason alone is enough justification for the three African-American women to physically attack the Asian hostess.