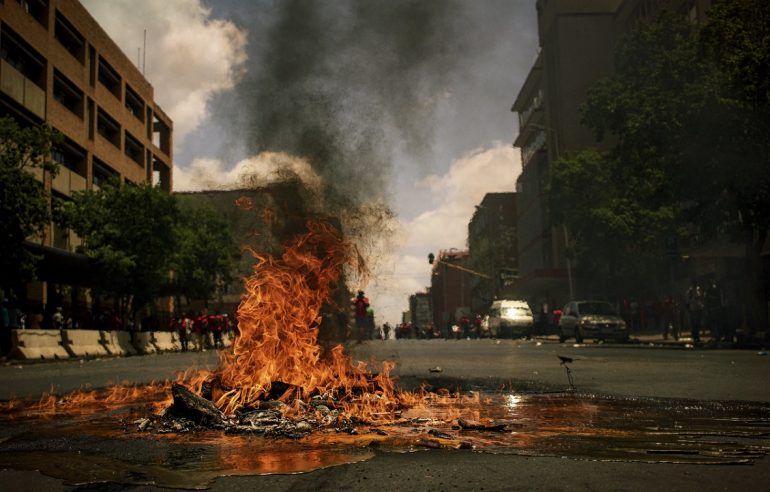 PHOENIX, South Africa—More than 1,000 supporters of South Africa’s leftist opposition party, the Economic Freedom Fighters, demonstrated on Thursday against the killings of 36 people in Phoenix, a Durban suburb in the KwaZulu-Natal province.

The demonstrators demanded justice for the dozens of people who were killed in “cold blood.”

Massive riots broke out in July after the imprisonment of former South African president Jacob Zuma on corruption charges. Over 300 people died in the week-long riots and were only quelled when 25,000 troops were deployed.

Over 89 malls and shopping centers were targeted, along with 45 warehouses, 22 factories, eight banks, 88 ATMs, 89 liquor stores, eight liquor distributors, 139 schools, and 37 trucks, according to Daily Maverick.

During the riots, racial tensions flared up in Phoenix, a town predominantly South Asian/Indian. South Africans of Indian descent are responsible for a large majority of the country’s wealth—from car manufacturing to IT—the Indians have a strong foothold.

Many Phoenix residents patrolled their neighborhood during the riots to prevent its shops and businesses from being looted and destroyed, however, some Indians are accused of shooting black rioters.

According to the Associated Press, police confirmed 36 people were killed in Phoenix, 30 were shot and six others were stabbed and burned. Authorities confiscated 264 firearms from individuals and security companies in the area.

One angry demonstrator screamed, “Asian control is over! African pride! Kill them all!”

Police have arrested 22 people for the killings in Phoenix and charged them with murder, attempted murder, and assault, reports AP.

Marshall Dlamini, leader of the demonstrations and member of parliament for the Economic Freedom Fighters, accused South Africa’s government of allowing Indians to inflict racist, vigilante violence against Black people.

“They (the government) have sent police here to our march, but where were they when our people were being killed?” Dlamini asked.

Dlamini is also irate police conducted searches for looted goods in only Black neighborhoods and never touched the Anglo or Asian communities.

One South African stated, “Asians and Whites steal more from Black Africa than anyone. We should be searching their houses for looted goods! [Our] country would be richer than everyone if Whites and [Indians] didn’t hold us down!”