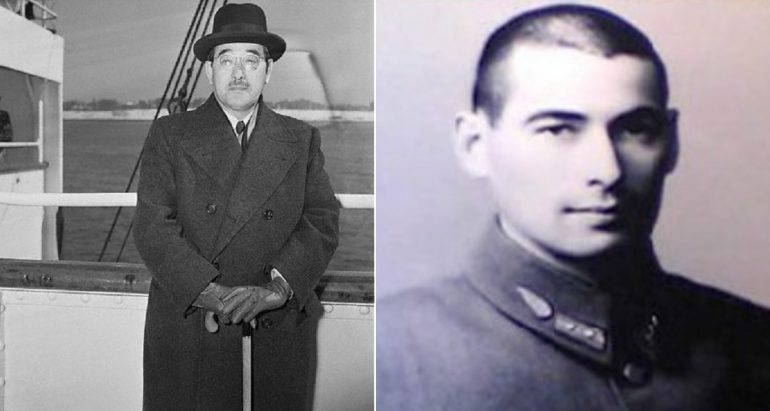 On December 7, 1941, The Imperial Japanese Empire attacked the American naval base in Pearl Harbor, Hawaii, crippling the American Pacific Fleet and dragging the United States into World War II.

“We can’t lose the war at all. We now have an ally which has never been conquered in 3,000 years,” a joyous Hitler stated after being informed about Pearl Harbor.

However, many may not remember Japanese ambassador Saburo Kurusu failed to deliver a declaration of war to the United States one hour before the Pearl Harbor attack, due to technical problems with his diplomatic coding machine.

Saburo Kurusu was the Japanese ambassador to Nazi Germany from 1939 through November 1941. He signed the Tripartite Pact with Germany and Italy, thus creating the Axis Pact on September 27, 1940. He would later be sent to the United States as Japan’s key diplomatic envoy.

Kurusu was married to an American woman, Alice Jay Little. They had three children together, a son and two daughters, the eldest son was Ryō Kurusu born in Chicago, Illinois on January 8, 1919.

Despite Saburo’s position, he was pro-American and did not agree with many of Japan’s positions, including the invasion of China and the “rumors of brutality,” the Japanese were inflicting in China, Korea, and the Philippines. However, he disdained the idea of England and the rest of Europe, and the United States were free to have countless colonies while Japan was frowned upon.

Ryō Kurusu joined the Imperial Japanese Army Air Force and was later commissioned as a Second Lieutenant. He suffered extreme prejudice during his military service because he was half-American while other half-White Japanese pilots in the academy were German and were treated with the same respect as full-blooded Japanese pilots.

The Germans provided the Japanese with schematics to the BMW 109-003 turbojet engine. From those schematics alone, the Japanese were able to design a more fuel-efficient and reliable engine for their Nakajima Kikka jet fighter—Nakajima (Fuji Heavy Industry) was founded by Subaru Motors founder Chikuhei Nakajima. Both he and Henry Ford attended flight school together at Curtiss Aircraft in New York.

Ironically, 75 years later, BMW would supply Fuji Heavy Industry’s parent company, Toyota Motors with another engine. The B58 inline 6 for the 2020-2021 Toyota Supra.

Ryō Kurusu would have a love affair with a beautiful Dutch woman, the daughter of Dutch missionaries in his father’s hometown in Kanagawa Prefecture. However, all non-German/Italian Europeans were sent to special concentration camps as enemy aliens, including Dutch missionaries.

He would later participate in the air defense of Tokyo in February 1945. He shot down multiple B-29 bombers with his Nakajima Ki-84. Overworked and fatigued Kurusu was struck in the head by a taxiing Ki-43 Hayabusa’s spinning propeller on February 17, 1945. He was decapitated instantly.

Ryō tried his best to help his Dutch girlfriend, now stuck in a concentration camp during his military service. He snuck in food and eventually impregnated her.  She later died of tuberculosis shortly after giving birth to their son. He was later raised by Ryō’s sister after the war.

Saburo Kurusu was later cleared of all charges by the Chief Prosecutor in the international war crimes tribunal. He had no idea the Japanese were planning to attack Pearl Harbor and genuinely tried negotiating peace between the two countries. Saburo Kurusu died in April 1954, shortly after hearing his youngest daughter gave birth to his second grandchild.

Alice Kurusu lived on for another 20 years and died in 1973 from a sudden heart attack in a house she shared with her eldest daughter and her husband in Nagatacho, Japan. The last words Alice muttered were, “Watakushi wa Nihonjin desu” (I am Japanese).

She was buried next to her husband Saburo and her beloved son, Ryō.