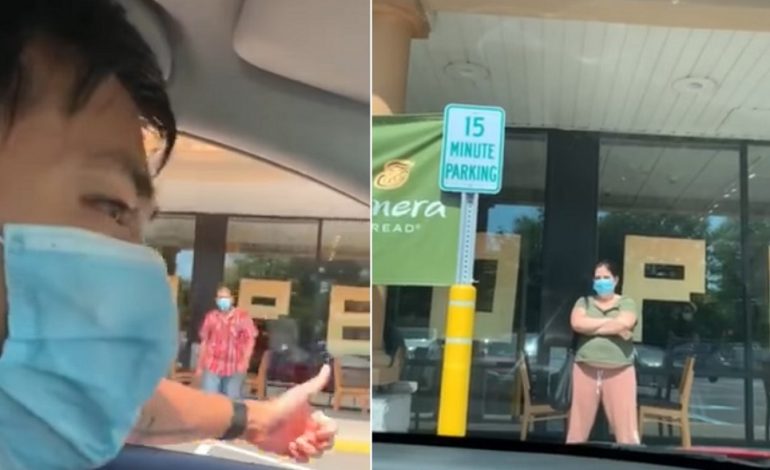 This incident happened to David Sue at a Panera Bread in Little Neck, New York on July 19. These are his words.

“So I was just a victim of racism at the Panera Bread in Little Neck. I went there and ordered curbside pickup for coffee, then waited in my car for a while. No one came out with my coffee, so I went in to grab it from the Rapid Pickup shelf, but it wasn’t there either. So I went to the counter to ask if they had it ready, and the Asian employee (I mention this because it matters later) apologized and ran to grab it. Once she left, the middle aged white couple on line started muttering about me cutting the line. I ignored them for a while until they said, ‘These people are ruining the country.’

That got my attention.

“These people?” I asked.

“Yeah, you people!” The man yelled.

“What people are you talking about?”

“People like you who think they’re better than everyone else. Don’t you see there’s a line? Why don’t you wait on it like the rest of us!”

Right then, the Asian employee came back with my coffee. The white couple is shouting at this point, and I tell her that they’re being racist to me. As if on cue, they start shouting something about the “Wuhan virus” and more about how we’re ruining the country. Instead of kicking them out, she immediately went to get the manager (white guy), who came and asked what’s going on.

“These people are being racist,” I told him.

“Well, I have no proof of that,” he replied.

I told him that the employee heard everything, and he looked at her, but she willfully ignored everything going on and called the next people on line. The manager offered to call the police, but I declined, as they wouldn’t do anything about it.

This whole time, the white couple is in my face screaming at me. They then shout that Panera just lost their business and they’re never coming back. I turned and said, “Then get out of here!”

At this point, the manager got upset at ME and told me that I need to “LEAVE RIGHT NOW.”

Alright, fine. Maybe I shouldn’t have said anything. They hadn’t said anything racist since he got there, but he did absolutely nothing about them screaming at me. But the minute I said something to them, he kicked me out?

I grabbed my coffee and went to my car, and they followed me the whole way out, taunting me all the while. The man threatened to break my car window if I don’t leave immediately, so my wife started recording them.

I should have taken video of the whole thing, but unfortunately, all I got was the few seconds my wife took of the lady yelling at our car.

The most disappointing thing about this whole incident was when the Asian employee didn’t defend me. She heard what they were saying, and she made a conscious choice to stay out of it. That… hurt. More than anything those racists said.

I haven’t contacted Panera corporate or anything. To be honest, I don’t really know what I want to accomplish by posting this. I guess just to spread awareness that this stuff isn’t just happening in the news. It happens to real people every day.“

I just got off the phone with corporate. They offered me “a $60-75 dollar gift card to make (me) feel better.” The representative could not offer me any information about what kind of training or disciplinary action was being implemented, nor was she even familiar with the incident that took place. I informed her that Panera’s offer made me feel worse; as if Panera thinks that my dignity is worth a gift card of $75 dollars and a modicum of attention. She apologized and promised to relay my response to her supervisors.

Since many people believe that racism could be solved by telling them that I ordered in advance, I’ll just explain that I did. They were privy to the whole conversation I had with the employee about my Curbside Pickup order. I also explained to them that I had ordered through the app, and I have no “privilege,” which they were accusing me of having, as everyone is welcome to download it and order in advance. They, obviously, did not care in the least.